Discovering prestigious convention centers, hotels and locations perfect for incentives, team building and corporate events in the city that is a candidate for the Italian Capital of Culture 2020

In Parma there are the Roman city and the Medieval one, Renaissance Parma and the Baroque, the Bourbon and the Enlightenment one, the revolutionary and the Hapsburg one, the rural Parma and the entrepreneurs Parma, Verdi’s city – of the powerful and nationalist feelings of melodramma – and the barricades of Parma, the profound city of popular traditions, Oltretorrente Parma, and the innovative and technological Parma: all of these souls are, together and simultaneously, the city where we live in. Going out on street and walking for few minutes we pass through these different times, without even realizing it, and we go deep inside a conundrum of feelings and visions of the world which directly comes from every layer of time. The experiences of the social groups also contribute to mark and to connote the different times of the city, but they define another kind of time, the flow: a hyper- connected or pre-digital time, time to work and to relax, time for children, young or elder people, or even for foreigners or travellers.

Expected moments correspond for each of these experiences, and they search perspectives for their realization in the city and the city should intercept and ensure these expectations. Historical times and social times, naturally in connection with the areas that characterize them, represent the system in which, today, the cultural identity of the contemporary Parma is played and discussed. A political challenge, certainly, but, first of all, a cultural challenge, both set to build an increasingly conscious and welcoming Parma. It’s precisely on the theme of “time”, about its regeneration through culture, about its ability to give rhythm to the city life and to demolish historical and social barriers by sharing and growing processes, that Parma has decided to build her candidature as Italian Capital of Culture in 2020. “Culture marks the passage of time” means understanding culture in its larger, alive and productive sense. This is the decisive factor in the negotiation process that the different temporal and social dimensions reclaim: culture defines the city lifetime and in doing so it favours the abatement of the historical and social fences that make complicated dialogue forms.

The pilot Project represents the Parma 2020 paradigm and it develops through four synergistic actions, between ancient places and new districts: future of memory (namely the old Hospital opening with a big multimedial exhibition); Time- Lapse (exhibition at Governor’s Palace to discuss on how media have modified our time and space perception) and Open call (collaborative system of public-private stabilisation with particular attention to the development of cultural and creative companies) that will be accompanied by an extraordinary event that will be revealed in 2019... coming soon!

Discover the best bleisure sites in the beautiful city of Emilia.

The secret is knowledge. Food Valley Travel & Leisure, is a company active as incoming tour operator and destination management enterprise for Parma and its territory, as well as for the entire Emilia Romagna and for the most particular incentive destinations of the whole Italian Peninsula. Today, it’s able to offer to both business and leisure travelers the best locations for hospitality – such as hotels, agritourisms, b&b, castles and historical residences –, and the best services in the territory (tour guides, transfers, hostesses, tastings, cooking courses and team building activities), thanks to a deep knowledge of all the destinations, to years-long experience and to the journeys that it proposes.

What is the reason for aiming to Emilia Romagna as business and bleisure destination? «We were the precursors of bleisure as trend, because Emilia Romagna is a complete destination, which has everything to combine work and leisure times. As I said, we have always highly enhanced the gastronomic part, by promoting quality products of the territory and aiming to experiential tourism, capable of giving emotions. Then, it’s easy for the people who come to Emilia Romagna for a business stay, to return also for a holiday. Foreign travellers also appreciate the territory on a human scale. Nevertheless, the region has not been at the first place among the Italian destinations of business travel yet. That’s the reason why the promotion of the territory remains central», says the founder Andrea Aiolfi. 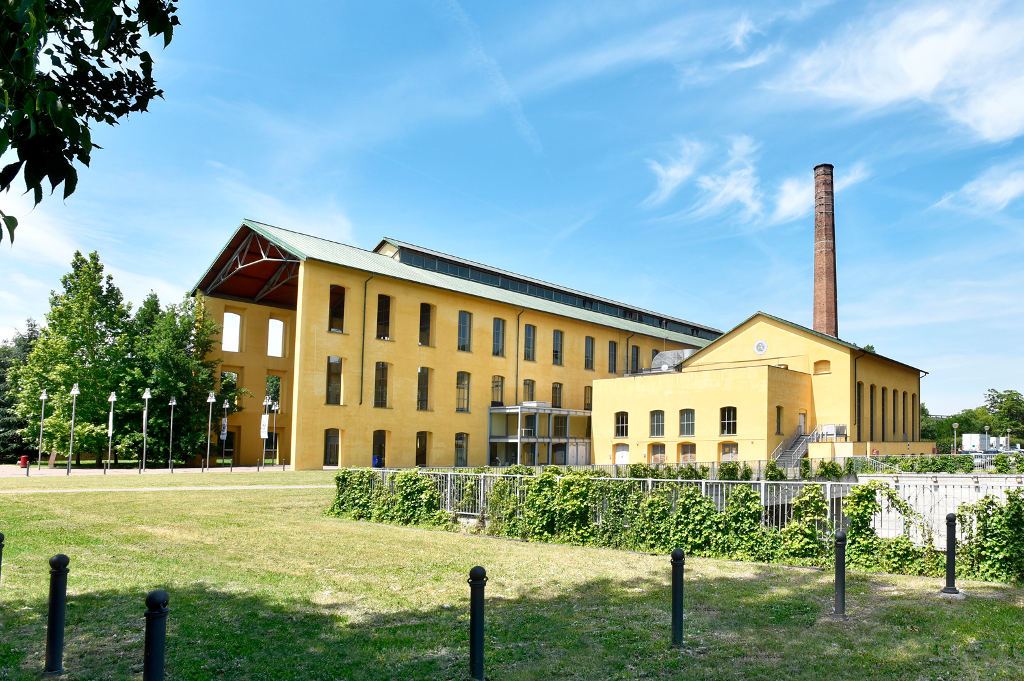 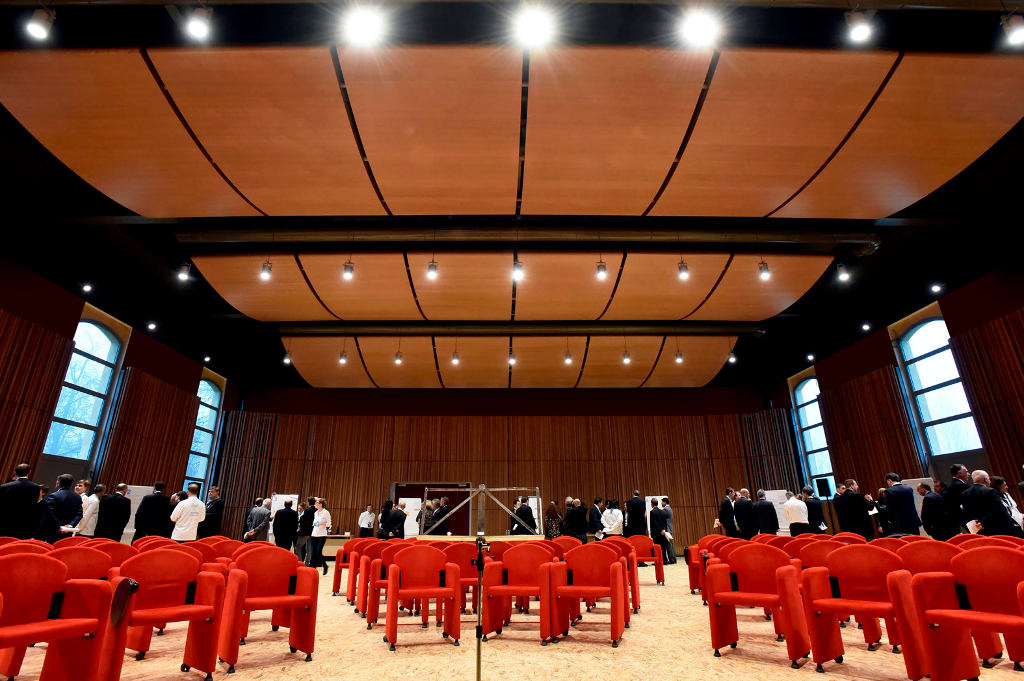 The Paganini Congressi rises from a spectacular intervention of architectural and functional recovery of an old industrial building. It has services adapted to the highest international standards and it is signed by a world famous architect, Renzo Piano. This facility has modern installations and it’s located in the park that has hosted for almost a century the historic sugar factory Eridania. It’s a place where culture and technology meet each other in an unique and very prestigious musical and conference area. The facility hosts three structures: the Paganini Auditorium, the Spazi Ipogei and the Center for Music Production “Arturo Toscanini”. Each of them has its own identity, but they can also be used together, because they are connected by a system of stairs and lifts. This polyhedral facility includes several multifunctional rooms, with a total capacity of almost 1,700 seats. Moreover, it has large and luminous lobbies, foyer, catering and exhibition areas, fitting rooms and service areas. It’s the ideal place to host musical events, concerts, corporate conventions, conferences and meetings of various sizes. 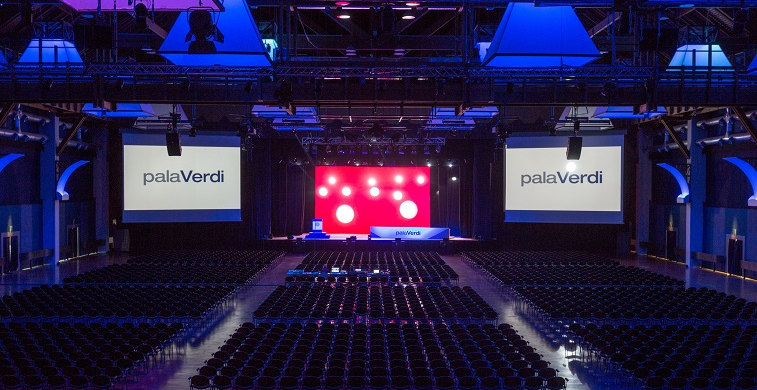 Palaverdi, the location for events and conferences in the city

2018 was a successful year for the Palaverdi Parma Convention Center. Hosting 15 events, with a capacity for more than 2000 people, this renowned convention centre in Parma earned itself prestigious recognition in the Italian meeting industry, confirming itself as a point of reference for city maxi events. A historical milestone testifying to a growing trend, which saw the structure reach the height of its potential hosting both national and international events, further increasing its brand awareness and reputation as a reliable and successful location for every kind of event: whether institutional conventions, gala dinners or exclusive All this, thanks to the large and versatile spaces equipped with the latest technology, in addition to an experienced, expert management team, which closely collaborates with meeting planners to create unique formats of the highest quality, at affordable prices.

Grand Hotel De La Ville, the meeting point for tourists and companies in the city center

In the Parma centre, between the big park dedicated to the judges Falcone and Borsellino, roads and buildings of the historic centre, the Grand Hotel De La Ville represents a place of charm and prestige. Here, the tradition of good cuisine and Emilian warm hospitality are combined in an innovative environment. This five star proposal is, in fact, within an ex industrial complex, completely upgraded by Renzo Piano project. Today, the Barilla Center is a place where the enterprises and the products of city tradition live together, between the Academia Barilla and the Consorzio del Prosciutto di Parma, and new city spaces for meeting, entertainment and business. 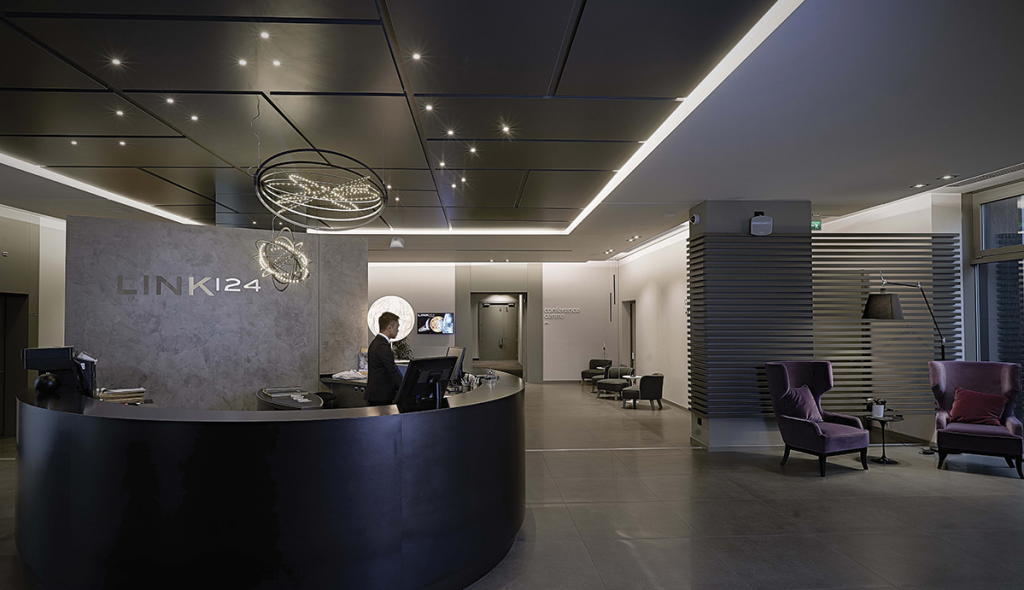 It’s an ambitious, wonderful and complicated project the one carried on by Poli family, who have been entrepreneurs in premium hotellerie and catering in Parma for fifty years. On one side there’s Inkiostro, the gourmet restaurant, entrusted to Francesca who well expresses the soul of Parma, capital of good food. Located in the same facility, but in a separate building, the gourmet restaurant Inkiostro is the ideal frame for elegant business lunches and dinners. In its refined look, carried out in black and grey shades, supplements of glam nuances stand out: acid green, antique pink and fuchsia. Terry Giacomello, one star Michelin chef, runs the kitchen. On other side, we find LINK124, a modern and elegant 4 stars business hotel, managed by Gianluca; a design hotel, built to offer a warm family welcome and the maximum comfort to the business traveller, but that is not all. Besides being equipped with all services, technologies and areas (all of which are modular and able to accommodate overall up to 200 people) for meetings and events organisations, it provides 118 stylish rooms with latest generation facilities, a bistro and an inner lunch break. 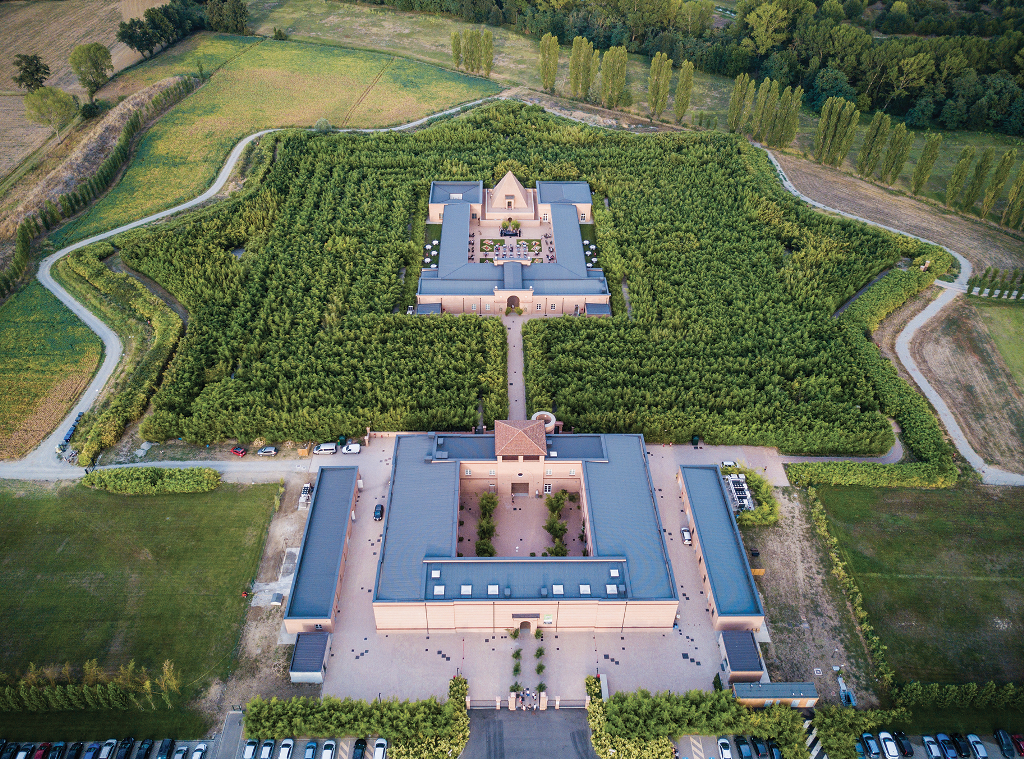 The Labyrinth of the Masone, a cultural park with unique charm, available for business and private events

The Masone Maze was designed by Franco Maria Ricci, publisher, graphic designer and bibliophile, from his country estate in Fontanellato. What’s more, it’s easy to reach thanks to the nearby motorway exits of Parma Ovest and Fidenza. The maze extends over seven hectares and is made up of two-hundred thousand bamboo plants of twenty different species. Franco Maria Ricci came up with the idea thanks to a meeting with the Argentinian writer Jorge Luis Borges, who had forever been fascinated by the maze symbol. The project, which took a long time getting off the drawing board, was completed in 2015, when it opened to the public. A truly fascinating path, which enchants its visitors and stimulates reflection, where you can lose yourself and, once lost, rediscover yourself. That is to say the Art Collection of Franco Maria Ricci, covering five centuries of the History of Art from the sixteenth through to the twentieth centuries, including sculptures, objects of art and paintings, in addition to an area dedicated to temporary exhibitions and a Library. An original and multiform, lively and cosmopolitan space, which has now become a point of reference for the territory at an international level. Ricci’s enthusiasm upon learning that Parma, his beloved native city, had been voted the Italian Capital of Culture 2020, therefore comes as no surprise. For events organisation companies, The Masone Maze offers a truly surprising and extremely versatile setting. The indoor and outdoor spaces designed around two courtyards, one at the entrance and another central one, feature the latest technology and offer the perfect setting for spectacular dinners, parties, performances and open days. Visitors have the option to book either a few rooms or the entire complex. The rooms of the Central Court, in the heart of the maze, can host up to 500 people or more than a thousand if the outdoor spaces.

There is a place, in the province of Parma, in the heart of Verdi’s land, that from these inspirations He has created attractive offer for the Mice. Fidenza Village is decidedly original goal and with many surprises dedicated to businesses, is fully part in what can be called shopping tourism destination, a destination that is quite capable of creating synergies between itself and the surrounding area, so rich in history, culture and tradition. In addition to shopping experiences offered by Fidenza Village in its more than one hundred boutiques with discounts up to 70% all year, integrate seamlessly services and spaces on all the territory to offer conference and incentive in complete and unedited able to meet the most varied demands and requirements of the organizers. Moreover In The Fidenza Village Lounge, you can create a groundbreaking event, thanks to the modular space, the on-site technical support and the luxurious and relaxed environment of this innovative meeting room. 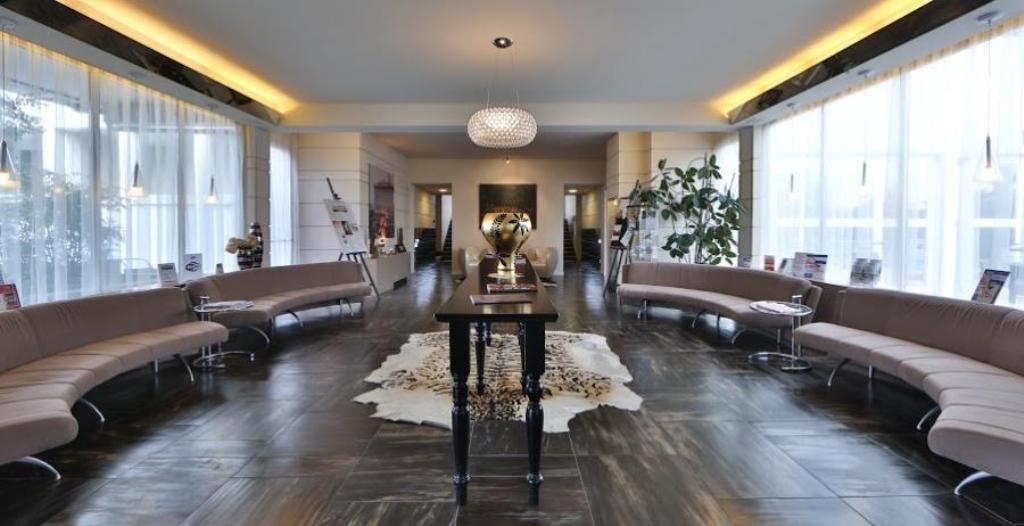 The Best Western Hotel Farnese, name inspired by the family that more than any other has shaped the history of the city, is a structure with a strong business vocation. In fact, in addition to offering the only outdoor swimming pool with Jacuzzi in the center of Parma, it offers three fully equipped meeting rooms with a capacity of 60 seats and excellent catering services. It also has four day-office solutions, which in the daytime are offices equipped with everything needed for work, while at night they become comfortable bedrooms.

For more information on the structures, click on details and consult the pages of our Directory: