A journey on two wheels or on foot which extends for 300 kilometres between trulli and ancient farms turned into farmhouses, enjoying the magnificent landscape, great food, and great art

Expanses of centuries-old and thousand-year old olive trees that seem living sculptures, alternate with fields of prickly pears that sometimes let you glimpse at grey or limewhite cones of ancient trulli, many of which are also summer residences of international jet set. We are in Valle d’Itria, one of the most beautiful and evocative places of the Boot, which, thanks to a project of the GAL (Local Action Group), can be travelled by bicycle or by foot, through a 300-kilometer cycleway. A real treat for the eyes, for the spirit, and beyond. Yes, because this route that goes through the three municipalities of Cisternino, Locorotondo, and Martina Franca, in the respective provinces of Brindisi, Bari, and Taranto, lets you reach places of scenic, religious, and cultural interest, but also restructured trulli and ancient farms turned into farmhouses where you can spend the night and delight the palate with genuine flavours that send you to a distant time. 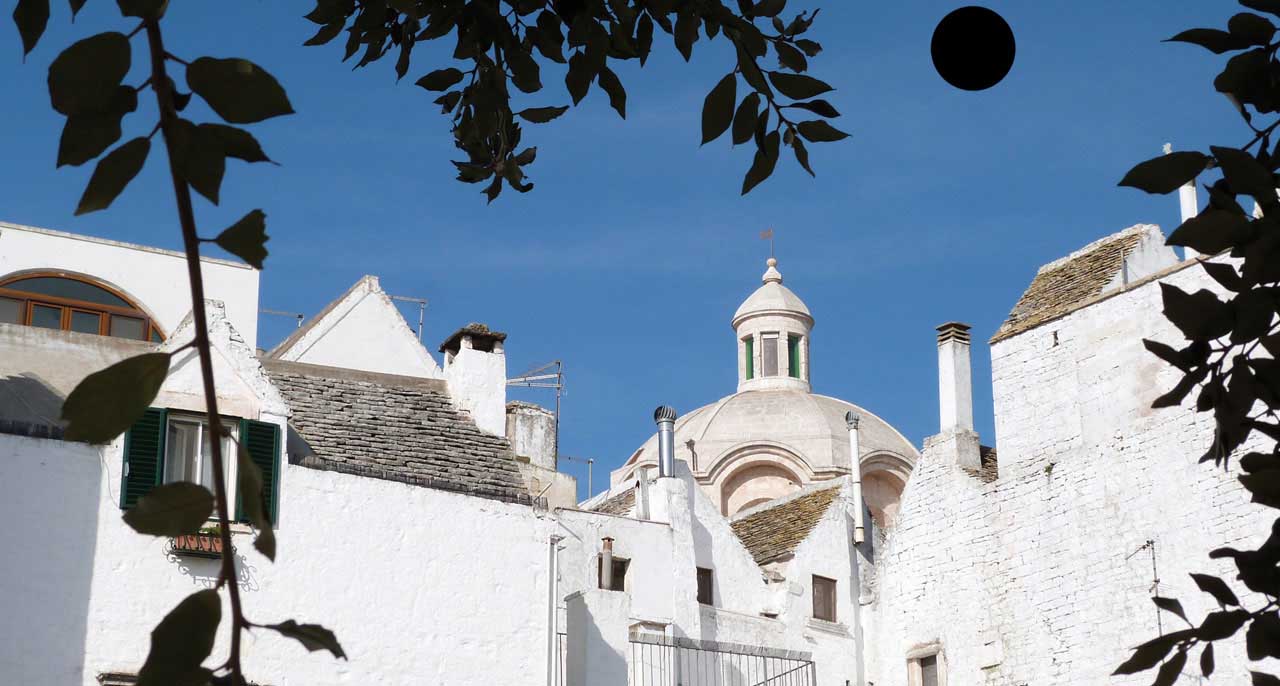 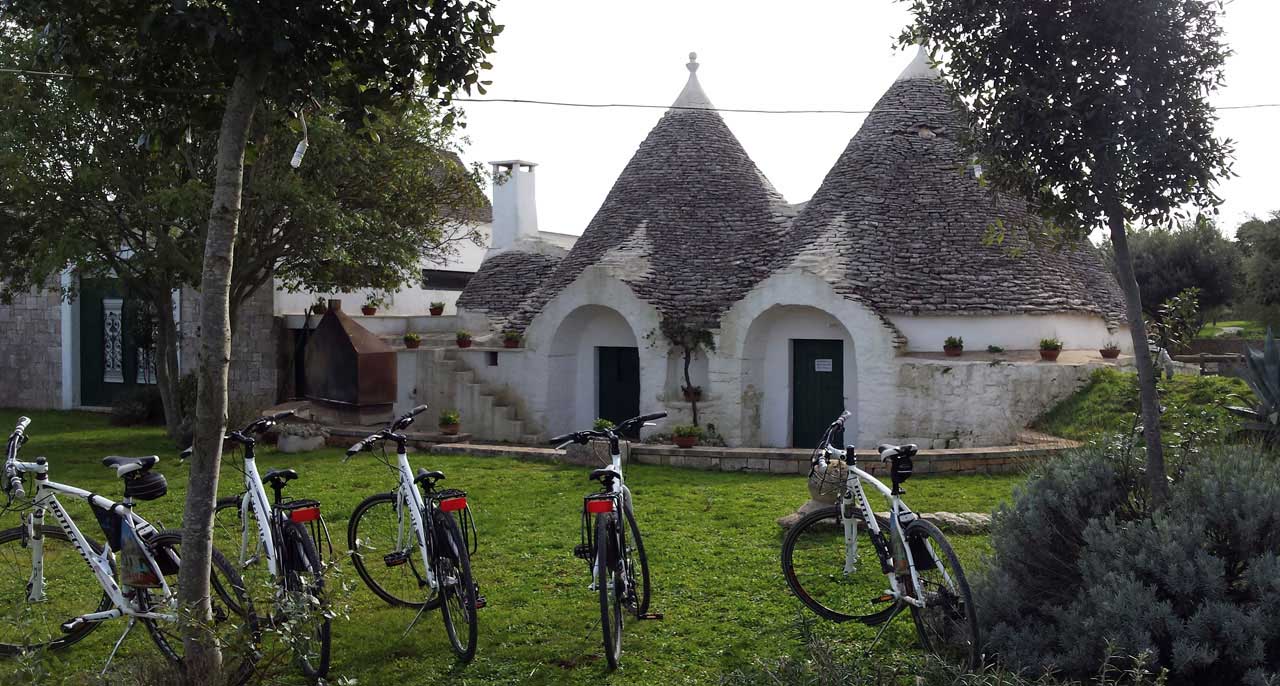 La cycleway of water
The objective of the GAL project is, in addition to the enhancement of the most important aqueduct in Europe and its engineering work, that of contributing to the knowledge and protection of the water resource and deseasonalizing tourism with initiatives that are eco-sustainable and respectful of history and places. Added value of this bike path is, in fact, the corridor of the Apulian Aqueduct, dating 1906, which takes us for 20 kilometres, starting from Figazzano, on that path between Locorotondo and Grottaglie in the heart of Valle d’Itria, and crosses the municipalities of Cisternino, Ostuni, Ceglie Messapica, Martina Franca, Villa Castelli. You cycle in the rural history of these places and on the ancient canal bridges, admiring the splendid and evocative landscapes, along paths that cover the conduct of that Aqueduct that carries Sele’s water from Irpiniato Puglia. And you cannot resist the temptation of taking some photos or stopping for a snack at the ancient Masseria Montedoro, in the countryside of Ceglie Messapica, where you can rediscover ancient flavours of the local gastronomy enjoying panzerotti, focacce, and lampagioli, just for starters, and then to follow: fresh ricotta, burrate, capocollo, the traditional dishes such as orecchiette, cooked using mostly products of the company. Guests are welcomed in the old stables with the furnishings of the past. In this organic agricultural company, they also raise the precious breeds of Martina Franca donkey and Murgese horse. And after all the eating and drinking fine wine, you go back on your bike to continue the tour that will also help to burn the too many calories accumulated. Surrounded by the large woods of the Murgia – once a refuge for bandits and characterized by “Quercus trojana”, which grows only in Puglia and Basilicata – the Valley delights our eyes with its territory that is famous also for the wines, between the hills of Verdeca, of the white of Alessano and Minutolo. The stone of the trulli, but also the characteristic dry stone walls, in symbiosis with the vine, is an integral part of this fairy land.

Trulli and farmshidden among the olive groves
Every municipality in the Valley has a treasure to discover: from the numerous Romanesque churches, to the Baroque that especially in Martina Franca you can appreciate on the portals of the patrician houses; from the intact medieval village of Cisternino, famous also for its well-known” fornelli pronti” (or “ready cookers”, butcher shops that make customers choose the pieces of meat to put on the grill and eat at the table), to that of Locorotondo with the characteristic sloping roofs, so-called “cummerse”, the only example in the whole region. This picturesque town – which owes its name (which translates to “circular place”) to the morphology assumed by the first town centre, built around the year 1000 – is also a member, with Cisternino, of the Club dei Borghi più Belli d’Italia (Club of the Most Beautiful Villages in Italy). The stop at Ceglie Messapica too does not disappoint the expectations, with its succession of trulli and farms hidden among the olive groves and karst caves such as the famous ones of Montevicoli. By pedalling and pedalling, intoxicated by the scent of the Macchia Mediterranea (the Mediterranean forests, woodlands, and scrub biome) you arrive to the Giardini di Pomona, or Gardens of Pomona, from the ancient Latin goddess of fruit. In the Figazzano district, in the countryside of Cisternino, this incredible Conservatorio Botanico reveals the characteristic vegetation of the Apulian countryside, and not only that: about 700 varieties of fruit-bearing trees, many species of smaller fruits such as mulberry, jujube, German loquat, service tree, cornel, azarole, purple apricot, just to name a few. The route starts from the wild varieties to show the historical journey of the evolution of species through the combination of human selection and adaptation to local soil and climatic conditions. You can, therefore, actually admire the organic method, with particular attention to biodiversity: use of bees to improve pollination of flowers, use of manure for fertilization.

The Places of the Myth
The landscape characterized by the lame and gravine of the countryside around Mottola hides ancient treasures that surprise you while you are intent on smelling the leaves of almost extinct medicinal plants: the rock churches. The most famous one is San Nicola, defined as the “Sistine Chapel of rock civilization” for the beauty of the paintings from the IX to the XIV century. Evocative and with an unusual floor plan is instead the one dedicated to Santa Margherita, patron of the expectant mothers, enclosed in round arches and decorated with scenes of her martyrdom. The only one in southern Italy for its development on two hypogeal floors, with the lower living-space of funerary destination, is Sant’Angelo: it is part of one of the most important rock villages of the area in medieval times, Casalrotto, built around the Benedictine monastery. In a very extensive cave complex there is the rock Chiesa di San Gregorio, which includes, in the immediate vicinity, the other two churches of the Madonna delle Sette Lampade and the Madonna degli Angeli. The interior features architectural and iconographic characteristics of great value. After being intoxicated by the scents of the medicinal herbs and having crossed the characteristic ‘tratturi’ (or cattle/sheep tracks) you reach, in Palagianello, the nineteenth-century Masseria Martellotta, which opened in August after a restoration made in full respect of the old architecture and original materials: wood, carparo stone, the chianche (slabs of limestone), tuff, and white stone. The former warehouses where they used to dry tobacco leaves have been adapted to sleeping area with six bedrooms. Worth noting is the excellent restaurant that serves dishes made from local ingredients inspired by the ancient recipes revisited by the skilful chef.

Saperi e sapori
(knowledge and flavours)
Not just the new cycling routes of the water ways, but also good food, is enough to warrant a trip to the southeast of Bari, where much is being done, particularly through the work of the GAL, to offer quality accommodating services to tourists. The Agriturismo Lama San Giorgio is an admirable example of this. A stay here regenerates the spirit and beyond. Located in Rutigliano, known as “ Città dell’Uva” (City of Grapes) for the large-scale production of high-quality table wine varieties (Italia, Vittoria and Red Globe), this nineteenth century structure, among rows of vineyards, in the shade of a grove of oaks, is also characterized by the Lama: a particular shape of the soil, once crossed by a watercourse, which makes the landscape even more appealing. Within this farmhouse, which is also an agricultural company, you can enjoy meals prepared following ancient rural recipes and with products grown within the company. We are in the land of bread, a symbol of the agro-pastoral culture of the Alta Murgia, a product that reaches its maximum expression in the Altamura ovens. The bread that is produced here boasts a thousand-year old history, as proved in the Horace’s Satires that defines it “the best in the world”; at the time, it was kneaded at home by women, which, after having characterized it with the initial letter of the name of the householder, they brought it to bake in the public ovens. The Pane di Altamura (Altamura’s Bread) was the first European product to be awarded the prestigious DOP (protected designation of origin) – conferred by the European Union in 2003 – in the product category “Bakery and bakery products”. We can have a taste of this delicious bread and not only that, at the restaurant “Tre Archi”, located in the historical centre of Altamura, specialized in zero km cuisine. A stop here will be etched in our memory for a very long time. Mushrooms of the Murge, pumpkin rolls with cheese and bacon, ricotta with candied celery. Just to make your mouth water. And to burn the many calories, a walk in the historical centre is a must and satisfying to the eyes which will remain enchanted by the Cathedral in Romanesque-Apulian style, but also by the characteristic ‘claustri’ (cloisters). These widenings that open in the maze of narrow streets, courtyards, and little squares, were once the core of community social life and constitute a network of urban rooms that is one of a kind. Not only flavours but also knowledge, theGALof south-eastern Bariseeks to promote even with its emigration workshop realized within the Castello Angioino di Mola di Bari. A stop in this interactive museum will be like a dip in the history of the area from where thousands of labourers left, with the crisis in agriculture, to face new challenges in distant lands, as evidenced by the screened films, but also by the objects and clothes of the past, pieces of our history that belonged to simple and courageous people, donated even by their families. Other than the Museum, it is worth visiting the Castle, which, built by Charles I of Anjou between 1278 and 1281 to defend the south coast of Bari from the frequent pirate raids, took the current shape of star polygon with the reigning Carlo V and thanks to the military architect Evangelista Mengada Copertino.