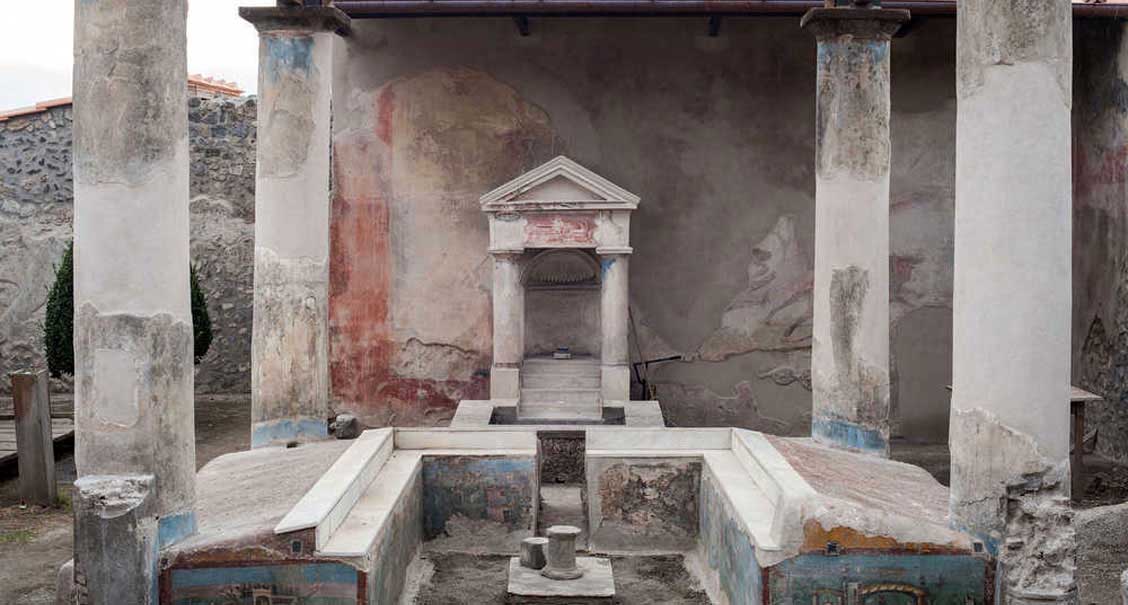 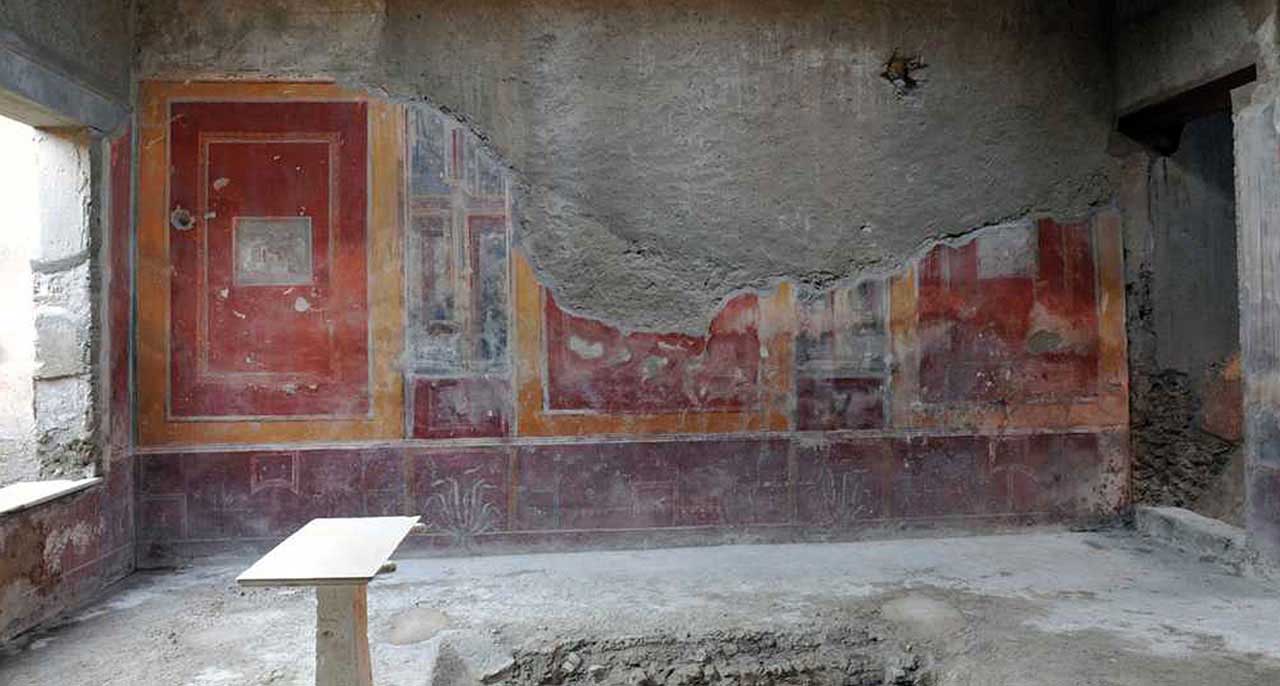 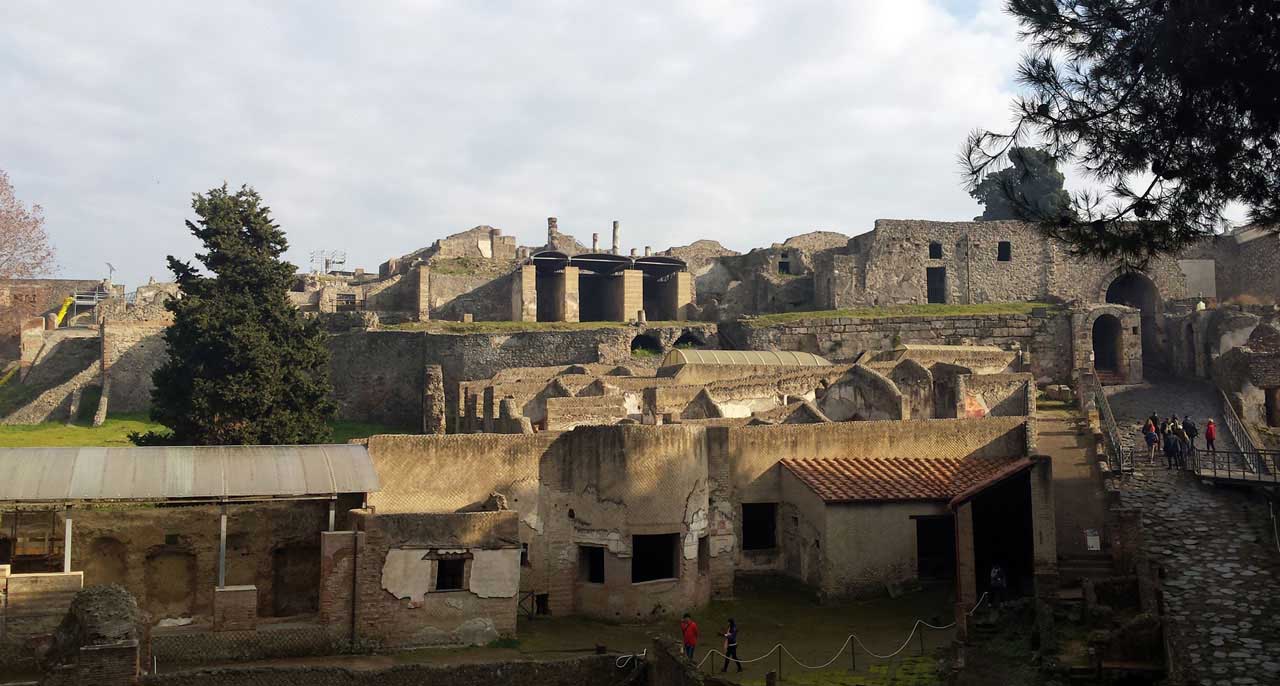 An extraordinary glimpse of what life must have been like in the Roman city before the eruption of the Vesuvio in 79AD buried it with its ashes. You can now admire it after the painstaking restoration of the six domus, done thanks to 3 million euros from the Grande Progetto Pompei

«We were on the news for the collapses; now we are on the news for the restorations. Italy is in a position to say enough to the unfinished works and if it ceases to cry to itself, it can go back to being a leading country, a lighthouse, what the world expects it to be». This was said by the Prime Minister Matteo Renzi during his visit, along with the Minister of Cultural Heritage, Franceschini, at the excavations for the reopening, on Christmas Eve, of six major domus on Via dell’Abbondanza: the Fullonica di Stephanus, the houses of Criptoportico, Paquius Proculus, Sacerdos Amandus, Fabius Amandio, and the Casa dell’Efebo. The New Year for the Vesuvius site was therefore inaugurated in the name of redemption and optimism, and, thanks to the new openings and exhibitions, it has received 2,934,010 visitors, an increase of 12% compared to 2014. Just on the first Sunday of 2016, as confirmed by the Minister Franceschini, 9,392 people have visited the excavations, curious about the six domus made accessible after the painstaking restoration of the Grande Progetto Pompei that is returning it to its former glory after years of collapses and damage due to lack of maintenance. The comparison with 2014 shows a significant increase of visits, in particular for the day of December 27, with a rich 56% followed by good percentages also for the 28 (+29% with 6,216 visitors against the 4,824 of 2014) and for the 26 (+15% with 5,892 visitors against the 5,163 in 2014). «A record-breaking Pompei», said the Prime Minister Renzi. For the government, a sign that the challenge of the restoration was won and that the 105 million euros of contribution from the EU were well spent. «What happened to Pompei in the last year and a half shows that when in Italy we manage to work as a team, we win even the most difficult challenges», explains Franceschini, «by team working we will win many more: by the end of the year, 3 other sites will be completed for a total of 37; the competitions have reduced the time, with an average of 60 days; so far the pace of work was equal to one million euro a week and we have never breached the economic balance». The first phase should end on the 24th of August, 2017,and phase two should begin. Meanwhile, Massimo Osanna, general manager of the Soprintendenza di Pompei, announces that the restoration work of the Schola Armaturarum, subject of the collapse in November 2010 that brought the site to the attention of the world, was started after the release of the area from confiscation occurred last December; an event that «is itself also an expression of the general revival of the Site that is finally perceived. We are working with a protective covering which will be completed by February, then allowing the work of restoration of the decorations and the walls for a cost of 80 thousand euros. The Schola, built around 79AD, in Via dell’Abbondanza, drew attention because of the rich decoration around the front door with trophies, palm leaves, winged victories, and radiated globes. Inside it, gladiator armours were found».

We can do more In Pompei the visitor numbers are expected to grow and for this we must also think about the external infrastructures such as parking lots, accommodation, hospitality, and transportation. A modern railway connection in a place like this is therefore fundamental. «In Italy, barricades are often raised when you try to change things», the Minister of Culture and Tourism tells us in regards to the resistance that emerged against the project of the new railway hub that should link the archaeological site to the high speed line, the result of a working group provided for by law and agreed to by the mayors of the area, the representatives of the Region, and several ministries. «It is an approved solution that will help tourists get to Pompei from Naples, and that will also be able to intercept the thousands of cruise passengers who arrive with the big ships. If they find a welcoming site and city, the tourists will be encouraged to stay longer and not, as unfortunately happens today, visit the site and then run away».

The six domus They have been reopened all together because as a whole they offer an extraordinary glimpse of what life must have been like in the Roman city in the years just before the eruption of the Vesuvio in 79 AD buried it with its ashes. Environments that tell the lives of the rich and privileged, such as La Fullonica di Stephanus, important laboratory for the washing and dyeing of fabrics that were treated in a large tub placed at the centre of the building. The washing and stain removal occurred with the use of clay or urine; the terraces on the upper floor were used for drying, and a press (the torcular) was used for ironing. Stephanus was certainly an important man in a pre-industrial society like Pompeii was. A dyeing laboratory was of considerable importance and full ones like him could also influence political elections. The environments in which the fullonica is structured derive in part from a previous house, an atrium and peristyle house that was restructured after the earthquake of 62 AD, transforming its intended use. It then returns to fruition, a fully restored building brought back, for the aspects that characterize it, to the conditions of its discovery, happened a century ago in the same years in which the nearby Casa del Criptoportico was brought to light. The latter, of great prestige in the age of Augustus, has rooms decorated with scenes of the Iliad, thermae, and after the earthquake it was probably sold and restructured with what was left of the closed cryptoporticus, and converted into a banquet hall with the creation of a brickwork triclinium, entirely covered with plaster painted red, animated along the banks by depictions of flowering plants and birds. In 1914, during the excavation of the garden, remains of victims of the eruption were found, perhaps the inhabitants of the house. Home of the rich Pompeian merchant class is La Casa dell’Efebo: built by aggregating the oldest interconnecting houses; it distinguishes itself for the luxury and splendour of the walls and floors decorations. Inside, banquet sets and prestigious artworks were found, including a bronze statue of an Ephebos that gave name to the house. Upon entering you meet the private family area with the lararium, the cubicula (bedrooms) and the service rooms. On the left, instead, the representative area, intended for receptions: of special value is the elegant exedra with mosaic floor of lively darting fish, and the winter triclinium with splendid marble floor, with floral motifs at the centre embellished with glass elements worked in relief. At a lower level, the garden with the benches of the summer triclinium beneath a pergola supported by four columns covered in stucco; along the inner walls of the triclinium bed there are Nilotic landscape scenes depicted, trend of the time, while at the centre there was a fountain with nymphaeum. But there are also more simple homes, albeit with fine paintings, home of ordinary people that in the shortage of space had used the stairwells for other functions, such as the one of theDomus Fabius Amandio, which, opened on the road, kept a dozen weaving combs, a circumstance that made us think also about the textile shop function. Modest is the house of Sacerdos Amandus, with fewer rooms than the others, but decorated with refinement, and that takes its name from the electoral inscriptions found at the entrance. It had a separate upper floor, of which we can still see theentry to the balcony of the façade that housed the workshop of a tabeilarius, manufacturer of wax tablets. La Casa di Paquius Proculus, which dates to the II century BC, is attributed to an influential citizen of Pompei (his famous portrait beside his wife is one of the icons of the site and is exposed at the Museo Archeologico Nazionale in Napoli), is spread over three levels and it has a simple and austere façade. The walls have big holes produced by the passage of the ancient rossore, clandestine diggers that after the eruption ‘broke into’ the houses in search of treasure. The main entrance preserves the famous mosaic with the chained dog. The lobby, whose extraordinary floor in geometric panels with animals of various kinds (oars, rudders, and human heads) is among the largest and best preserved of Pompeii, has a trapezoidal shape derived from the closure of the cubicula, then encased in the contiguous house Amandio. On either side of the entrance, two other cubicula. In the back of the house, the peristyle characterized by limestone columns covered with red and white plaster. At the centre of the garden a marble tub with four columns supporting the lush pergola. Among the rooms overlooking the peristyle created to welcome visitors but also to amaze them, there is a sumptuous triclinium, located in the east end of the building, with painted walls and a floor with an emblem with a Nilotic scene. Translation by Giacomina Spadavecchia

The archaeological site of Pompeii, a UNESCO World Heritage Site since 1997, has long held the record of the most visited place in the world. The surface of the ancient city is about 66 hectares, the excavated one is 44. 1,500 are the buildings (domus and monuments) brought to light. The numbers give an idea of the necessary commitment in terms of economic and professional resources: 1,500 buildings, 2 million cubic meters of walled structures, 17,000 square meters of paintings, 20,000 square meters of plaster, 12,000 square meters of floors, 20,000 square meters of protective covers. So this is not simply an extensive archaeological area, but an entire ancient city that time has given us with strong suffering, re-emerged from the earthquake of 62 AD to then be invested by the eruption of Vesuvius in 79AD. After seventeen centuries, the excavations, started in the mid-700, have revealed two-thirds of the settlement.