From the Mediaeval Apricale to the little Principality of Seborga, from the romantic Tellaro to the old Maritime Repubblic of Noli. A tour to discover an unexpected Liguria which surprises you from every angle 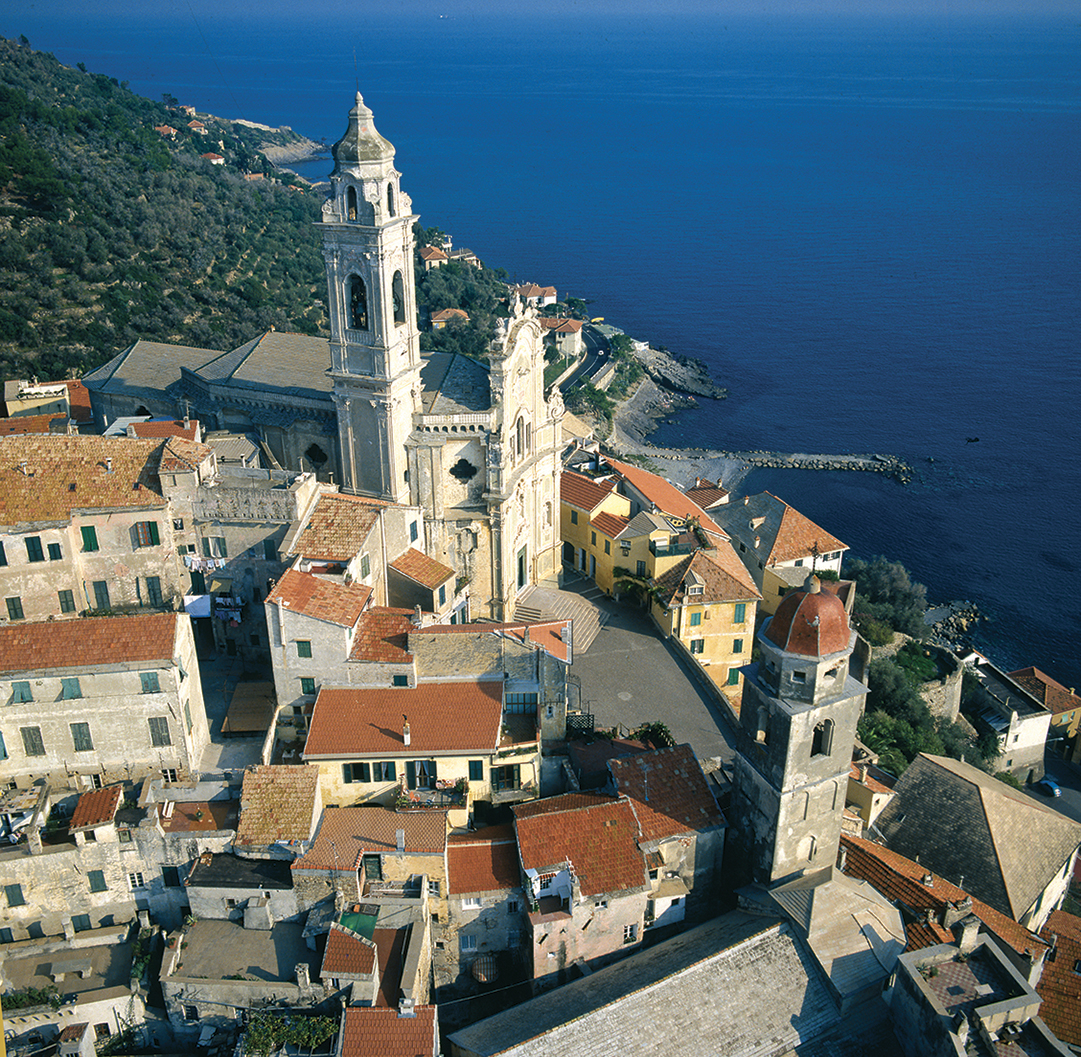 They surely aren’t famous as well as the Cinque Terre and, maybe, they haven’t got the glamour charm of Portofino and Porto Venere, nor the luxurious hotels of Santa Margherita and Rapallo. However, these five historical villages in Liguria, selected among the lots of hidden treasures of this region, will be able to astonish even the most expert traveller, unveiling their hidden beauty between alleys and little squares steeped in history and culture, giving compelling emotions in front of the spectacle of the sea and unforgettable walks up and down hills and mountains. So, follow us among the carrugi of Apricale and on Cervo terrace, visit with us the tiny Principality of Seborga, the poetic Tellaro and the old Maritime Repubblic of Noli, to discover an unexpected and very beautiful Liguria.

While climbing on the mountain, in the intense green of vegetation, the view of Apricale really takes our breath away. After the last curve, we see this tiny plot of houses perched on the steep slopes of the inland mountains of Bordighera, an embroidery of red roofs and stone walls that blends with the panorama and its colours. At 13 kilometres from the sea of the Riviera di Ponente, Apricale is a little treasure recently given back to its authentic charm by thorough works of recovery and restoration, performed by international artists and enlightened entrepreneurs, who decided give life back to this little Mediaeval jewel. Beauty, art and culture invaded the caruggi which climb up and down the mountain, giving the spectacular view of the Val Nervia and unforgettable glimpses of old houses, changed into painters’ ateliers and unique hotel rooms (especially those of the Albergo Diffuso Munta e Cara).

Cars must be parked at the bottom of the town, and from there you should move on foot to reach the Castle of the Lizard (Castello della Lucertola) of the X century, hosting expositions and exhibitions, the unique square Vittorio Emanuele, that is turned up by passion in January and in August, in summer as wells in winter, with the event Apricale Tango, and the Galleria del Teatro, hosting the shows of the renowned company of the Teatro della Tosse, funded by Emanuele Luzzati, every summer. Without doubt, the best souvenir to bring back home, from here, is a bottle of the very good extra-virgin oil of olives DOP Riviera dei Fiori, extracted by taggiasche olives.

Not very far from Apricale, but directly facing the sea, there is another enchanting and charming place, the little town of Cervo, known by tourists, but not too much, and so, it is very quiet and very enjoyable. The time seems to have stopped here, too: sandwiched between the blue of the sea and the green of the hills, its Mediaeval houses, the caruggi and the stone arches, the squares and the terraces depict an authentic and vibrating fairy tale landscape, to cross only on foot and without hurry. While Apricale develops up on the hill, after walking past the village walls, Cervo goes down toward the sea between rocky stairs and cobblestones alleys. Before arriving to the pebble beach, we reach the spectacular square in front of the church of San Giovanni Battista, called “dei Corallini” because it was built between the XVII and the XVIII century thanking to the coral fishermen’s offers. The churchyard is a magical place, with an almost perfect acoustics.

Discovered over half a century ago by Sandor Vegh, the renowned Hungarian violinist, who saw great potentiality in the characteristic concave façade of the Church of Saint John and who decided to transform the village of Cervo in the centre of the Chamber Music. Every summer the square and the whole town, from the old palaces, to the churches, to the very beautiful and very little hidden squares, becomes a stage for the International Chamber Music Festival, while all along the year the lively village hosts cultural events and coloured marketplaces. Cervo knows how to astonish and conquer even at the table. Very fresh fish is king, matched with the very good Riviera Ligure di Ponente Vermentino DOC.

We often think at the Middle Ages as a dark time of closure and superstition. Indeed, this twisted vision, coming from a prejudice of Renaissance, has no confirmed basis, especially if we look at the history of prosperity, travels and adventures of the Maritime Republics, Italian port towns that had had independence, autonomy, and great commercial wealth since the IX century. The most famous are Amalfi, Genoa, Pisa and Venice. However, there were other four towns that had a remarkable importance and among these there is the little village of Noli in Liguria. From its beautiful port ships with men and provisions departed to the Holy Land during the Crusades. Especially among the XIII and the XIV century this little Maritime Republic, ally of Genoa, used its wealth to build 72 towers, massive walls and prestigious palaces.

Today, to testify the old splendour we have just a little, but wonderful, part of these magnificent buildings: from the Porta di Piazza to the house Pagliano, from the tower of the Canto to that of the Common, from the remains of the town walls to the castle of mount Ursino, which, according to the legend, inspired Dante’s description of Purgatory. The old cathedral of San Paragorio is very beautiful, too, it is the emblem of Liguria Romanesque, it was built in the XII century and, according to tradition, here, the Maritime Republic began on august the 7th 1192. In Noli you might eat “il piatto dei Dogi”, a version of the “cappon magro”, a kind of tower of double baked bread, fish and vegetables.

It is one of the smallest commons of our Country with 315 inhabitants. But, above all, Seborga, or better, the Principality of Seborga is the smallest state in the world, even if it is an imaginary one. Just a little clarification: the claims of independence of this little village don’t have legal basis according to the Italian government, but as soon as the travellers step a foot in this old and charming little town, they can’t resist the illusion to find themselves in a tiny Mediaeval kingdom. It is not a pure marketing invention, nor a thematic park. Seborga is an old and attractive village, dating back to the X century, characterised by narrow cobblestones alleys, arches and rocky doors, that lead to the beautiful Piazza San Martino, with the Palazzo dei Monaci, where the old Seborga mint is still held. Around the half of last century, the inhabitants of Seborga claimed that after the Italian unification, made by the Savoy, the Principality of Seborga wasn’t legitimately listed among the properties of the Kingdom of Italy.

Therefore, they elected their prince, George I, with a plebiscite in 1963, after him there was His Majesty Marcello I in 2010, who was recently reconfirmed. Since more than fifty years the small imaginary kingdom has had its own Priors’ Counsel, its own constitution, it mists coin, the “luigino”, and it gives patents and passports (obviously without legal value). We don’t know if it is a tourist attraction or an authentic spirit of independence, but the unique history of Seborga gives this old village even more charm and magic. The typical dish is the Coniglio alla seborghina, with a minced of liver, taggiasche olives and white wine. It would be more or less like the Coniglio alla ligure, but it is rude calling it like that in the Principality.

The village of Tellaro faces the Golfo dei Poeti, right in front of Porto Venere and of the island Palmaria, however, it is still unknown to most. Nothing more than a hamlet of the much more known Lerici, this little and delicious group of houses perched on the cliff depicts one of the most picturesque glimpses of Liguria. As testified by the Pisa walls and towers, today the Mediaeval village is an exclusive little tourist port, but it proudly preserves its historical traits, its quiet and calm character, its legends. The most known is that of the giant octopus which, according what popular tradition tells us, got out of the sea during a night to ring the bell of the church of Saint George, warning the inhabitants of the Saracenic attack and so saving them from a terrible death. Even the pastel pink walls of the church perched on the rocky spur tells us this story, with an inscription that recites: “Saraceni mare nostrum infestantes sunt noctu profligati quod polipus aer cirris suis sacrum pulsabat”.

Tellaro, with its rough and charming beauty, conquered the heart and the pen of a lot of poets and writers: Mary and Percy Bysshe Shelley had lived for some time in the white house of San Terenzo, the writer D. H. Lawrence and his lover Frieda stayed in Fiascherino, unable to abandon that wonderful and wild landscape, and then Henry James, Charles Tomlinson, Virginia Woolf, Attilio Bertolucci, Giovanni Giudici, Eugenio Montale and Mario Soldati, who described the maritime village as “a nirvana between sea and sky, between the rocks and the green mountain”. Maybe with a little bit of spirit of thankfulness, or maybe right as an homage to the spineless saviour, the typical dish of Tellaro is the polpo alla tellarese, poached octopus, matched with potatoes, olives, garlic, parsley and lemon juice.